Zoniha is one of two optional Astral Knights to battle in Bomberman 64: The Second Attack, though beating her is the only way to achieve the good ending. Her element is light, and she is called The Purifying Light. She has yellow armor and enjoys picking on the male knights, especially Molok, but she does respect Bulzeeb. In the Rukifellth scene following Molok's defeat after Zhael, Zoniha says she likes Bulzeeb because of his "inflated sense of his own power", while in the alternate scene following Molok's defeat before Zhael, she says she likes Bulzeeb because he is more forgiving than her. She is fought on Amusement Planet of Epikyur, at the end of a roller coaster near the end of the stage, where she talks about keeping Pommy as her pet. After she is defeated, she attempts to destroy Bomberman and Pommy with a massive orb of light, but Bulzeeb sucks her attack up with a Gravity Sphere. He is willing to sacrifice anything for a rematch with Bomberman, and to prevent Zoniha from killing him, he sucks her into a Gravity Sphere. After the Angel of Light and Shadow is defeated, Zoniha is resurrected as an Elemental Knight. Afterward, she and Zhael search the universe to find some decent men.

If Zoniha is not fought before Warship Noah, then somehow, during the scene where Sthertoth transforms into the God of Chaos, Mihaele has the Light Stone as well as the other stones. It is likely that in this alternate ending, Zoniha was killed by Mihaele to get the Elemental Stone. In this dark ending, none of the knights come back to life.

Zoniha can be defeated in a similar manner to Molok; whenever she charges at Bomberman, if he plants a bomb where she is heading, she will run right into the explosion. Usually after taking damage, or using Rainbow Wave, she will use Seeker. This attack can be destroyed, but there can be more than one at once. After taking enough damage, she will use her instant knockout attack. If she hits Bomberman with one attack (aside from Rainbow Wave), he can be stunned and she will easily gain the advantage.

Zoniha's Japanese name (ゾニア) is derived from Amazonia (アマゾニア), in reference to her role as a warrior woman. Zoniha's English name adds a letter for effect, possibly to allude to her rowdy, boisterous laughter (ha), or possibly inspired by Zohar. 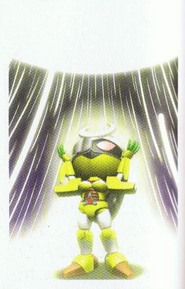 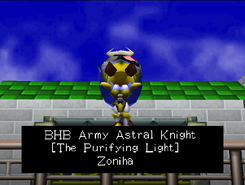 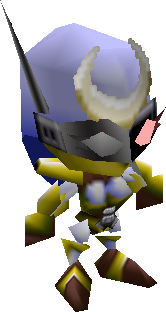 Zoniha laughing - rendered from game
Add a photo to this gallery
Retrieved from "https://bomberman.fandom.com/wiki/Zoniha?oldid=41080"
Community content is available under CC-BY-SA unless otherwise noted.