Yellow Bomberman (officially known as Yellow Bomber) is a recurring character in the Bomberman series. He mainly appears as an alternate skin to allow for more players in multiplayer mode.

He appears in Bomberman (TG-16) and Bomberman '93 as part of Black Bomberman's gang. Along with Red, Blue, and Green Bombers, he helped Black Bomberman in his evil ways until they were defeated by White Bomberman.

Yellow Bomber moves quickly and randomly. If he lines up horizontally or vertically with Bomberman, he will speed up and move in his direction as long as Bomberman is in his sight. He cannot place bombs, but he will harm Bomberman on collision.

Periodically, Yellow Bomber will stop moving and transform into a ball of fire, shooting one or two fireballs in random directions, which will harm Bomberman and detonate bombs on collision. While on fire, he is invincible, and will detonate bombs on contact. After some time, he will stop and revert to his ordinary form.

Yellow Bomber takes two hits to defeat and is worth 1000 points.

Yellow Bomber rides what appears to be an early Motorbomber. He moves quickly and randomly, charging at Bomberman on sight and harming him on collision. Occasionally, he will place a Land Mine Bomb, which has a Fire range of one. He takes two hits to defeat and is worth 2000 points.

In Super Bomberman R, Yellow Bomber appears as a playable character. He has a perpetually cheery attitude and is often very naive. He does, however, manage to get on Golem Bomber's good side. Aside from Blue Bomberman and Red Bomberman, Yellow is one of three Bomberman Bros. members to represent a primary color. 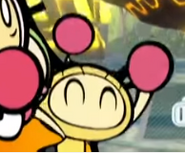 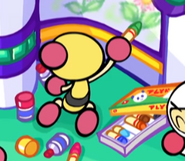 Yellow Bomber drawing on the wall with crayons

Add a photo to this gallery
Retrieved from "https://bomberman.fandom.com/wiki/Yellow_Bomberman?oldid=44305"
Community content is available under CC-BY-SA unless otherwise noted.