Planned February 29,1996
Virtual Bomberman is a game that was planned for the Virtual Boy but was never released due to being cancelled. Initial MSRP was ¥5,800.

As translated from one of the flyers:

"After Bomber Nebula was saved in the previous production, Bomberman has taken a brief rest. However, the mysterious warrior God Bomber suddenly appears. Is he an enemy or a friend? The ultimate beast machine god God Bomber offers a challenge, but with a terribly deep sadness in his eyes, and it is not clear why. While mysteries remain, now, again, a battle begins."

The game features a story mode and a challenge mode. The challenge mode timed players to complete the stage within the limit. Along with Louie, there are several new armors that were available to try. Elements of this game may not have been completely lost, as the three new animal partners and two mechs appeared in the game Bomberman World. The name God Bomber and the emblem on his visor were also used for the final boss. 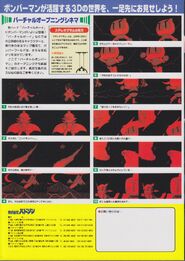 Flyer with several screenshots on it 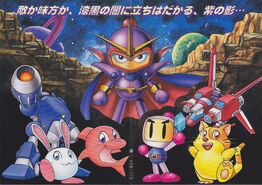 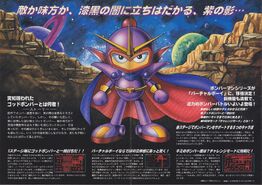 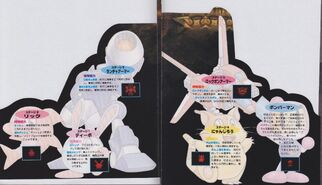 Game Info
Add a photo to this gallery

Retrieved from "https://bomberman.fandom.com/wiki/Virtual_Bomberman?oldid=34946"
Community content is available under CC-BY-SA unless otherwise noted.