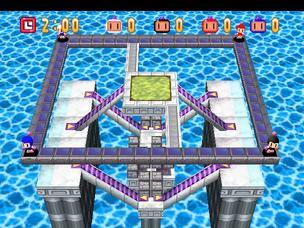 Up & Down (うえへしたへ) is the second stage in the Battle Mode of Bomberman 64. It consists of a three-layer structure surrounded by water. The layers are connected by flights of stairs. The lowest level contains many Soft Blocks, but players who go there to collect items will be susceptible to attacks from other players who are at higher levels. The stage begins with twelve Soft Blocks.

However, multiple players may vie for a position at the top. If this happens, a player may choose to trap his or her opponents, forcing them to retreat to a lower layer and putting them at a disadvantage. Two players may work together to force a third player down, for example, by kicking bombs at the opponent from opposite sides.

When Sudden Death begins, the water will begin to rise, slowly submerging the stage. 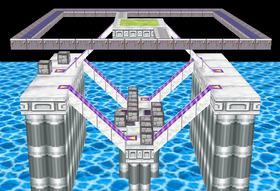 A better view of the stage's three layers 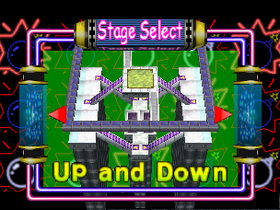 Stage Select screen
Add a photo to this gallery
Retrieved from "https://bomberman.fandom.com/wiki/Up_%26_Down?oldid=27500"
Community content is available under CC-BY-SA unless otherwise noted.