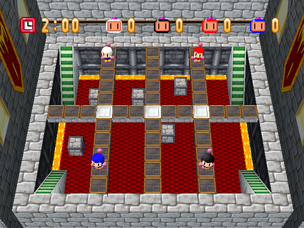 Top Rules (てんごく じごく, Heaven Hell, in Japan) is the fifth stage in the Battle Mode of Bomberman 64. The lower floor is flat and open, while four long and narrow passages cross over it on the upper floor. Soft Blocks are on the lower floor. While bombs can be thrown down to enemies below from the upper passages, bombs with large explosions that are placed on the lower floor may catch players who are passing above them. There is no safe place on this map.

Bombs may be placed on the lower floor beneath the passages in order to conceal them. Very powerful bombs that are concealed in this way may be potentially deadly to both players on the lower and upper floors. Bombs can be thrown and stacked against the wall may be able to blast enemies on the upper passages as well. Bombs may also be thrown up onto the upper floor to hit opponents who are there.

When Sudden Death begins, the left and right walls will start to close in on the stage.

If you are hit by these blocks you lose. 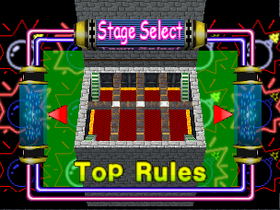 Stage Select screen
Add a photo to this gallery
Retrieved from "https://bomberman.fandom.com/wiki/Top_Rules?oldid=27511"
Community content is available under CC-BY-SA unless otherwise noted.