Super Bomberman 5
Terrorin World was the main setting in Super Bomberman 5 created by Emperor Terrorin. In here, White Bomberman and Black Bomberman explore the locations of their past adventures to arrest all Fiendish Bombers, and later enter the new artificial stronghold in order to defeat Terrorin and save Planet Bomber.

This hyperspace is located in a dimensional smog when Terrorin created the same world and proclaimed himelf as its emperor. When Planet Bomber was captured and the Fiendish Bombers freed, this world was explored by the Bomberman pair and they had to face with past enemies & traps to defeat the criminals in each zone. Shown in the real sceneries of the Terrorin World are places trapped in domes like a railroad, a music box, a circus, an eletromagnet and a clockwork. When Terrorin is destroyed during the final battle, this world disappeared forever. 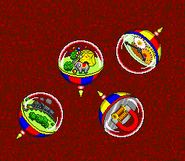 Clockwork
Add a photo to this gallery
Retrieved from "https://bomberman.fandom.com/wiki/Terrorin_World?oldid=41627"
Community content is available under CC-BY-SA unless otherwise noted.