Five alien cyborgs, calling themselves the Five Dastardly Bombers, arrive on planet Earth seeking the original Bomberman. Bomberman attempts to fight them off, but is taken captive on their space ship. He awakens in a prison cell in Magnet Bomber's base and must battle his way to freedom.[1]

The player must use bombs to defeat all the enemies and destroy all of the Capsules in the stage. This will open the exit, which the player can enter in order to advance to the next stage. There are eight areas in each world, six areas are normal areas and the final two are boss areas.

The Battle Game supports up to four players. Players can battle 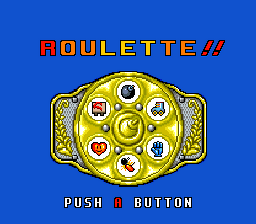 in a Single Match or a Tag Match. A new Battle Game setting, the Golden Bomber, was introduced in this game. With this feature enabled, the winning player of a match will be taken to a roulette-type mini game where they will win 1 of 6 items for the next set of battles: the Bomb-Up, the Speed-Up, the Power Glove, the Kick, the Heart, and the Geta. The winner will return as a Golden Bomberman for the next match.[2]

This password is for the Battle Game. It causes the hard blocks that fall as the time is running out to keep falling until they fill up the entire stage, killing all the players. Using this Game Genie code will achieve the same effect: DD2F8F6F

Story Illustration from the Manual