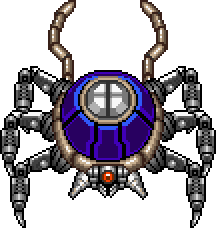 Spiderer is a boss that first appeared in Super Bomberman. It is a large, mechanical spider that throws bombs.

In its original appearance, Spiderer is faced in the final stage, and is piloted by Carat Diamond and Dr. Mook.

Spiderer's back opens up and eight bombs fly out, bouncing off and landing on random positions on the map. Once all eight bombs have been released, a visor shuts over Spiderer's eye. When the bombs explode, the boss opens its eye again, and then may or may not decide to move. It can walk in a straight horizontal or vertical line at a speed of 3, passing over any obstacles in the process. Where it stops is also random. When it has stopped moving, it will open its back and release bombs again.

Despite its large appearance, only collision with Spiderer's body will harm the player. Its legs have no effect. Due to the location of its collision area, Spiderer cannot collide with players who stand at the very bottom edge of the map.

Spiderer is only vulnerable to attacks when its eye is open. The eye is the weak point. Only the upper "arm" of an explosion can damage the eye - it cannot be blasted from the side or from the back, so bombs must be placed in front of it.

Upon its defeat, Spiderer explodes and releases the final boss, Uiteru V.

In this game, Spiderer is faced in an open battlefield with no grid of Hard Blocks. It walks very short distances and releases four bombs at a time. The bombs are thrown very rapidly, and are aimed toward Bomberman. Spiderer shuts its eye right before its own bombs detonate. It keeps its eye close while it walks, and only opens it when it begins to release bombs.

Unlike Hades, it does not appear to have a pilot. 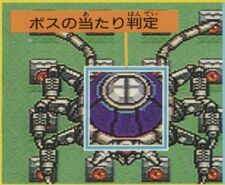 Spiderer's collision area, as depicted in the Super Bomberman Guidebook 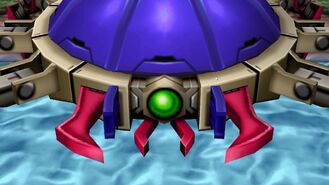 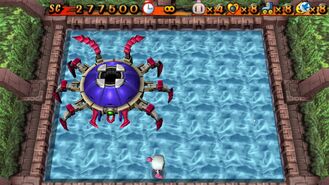 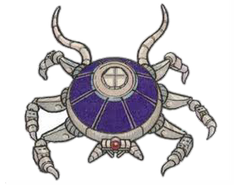 Retrieved from "https://bomberman.fandom.com/wiki/Spiderer?oldid=33089"
Community content is available under CC-BY-SA unless otherwise noted.