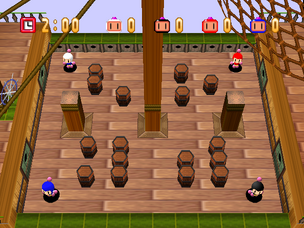 Sea Sick (かいぞくせん, Pirate Ship, in Japan) is the eighth stage in the Battle Mode of Bomberman 64. It is unlocked when all six worlds of the Story Mode have been cleared. The stage is a pirate ship on stormy seas, slowly swaying back and forth, around and around. Other than this effect, there are no special traps in the stage; thus, standard battle tactics are viable. There are 16 Soft Blocks at the onset of the stage, which appear as wooden barrels.

A player may hide behind the mast or the other two pillars and kick bombs out at opponents. Bombs may also be hidden behind these pillars in order to catch an opponent by surprise. Also, players may be thrown out of the top or bottom of the map. 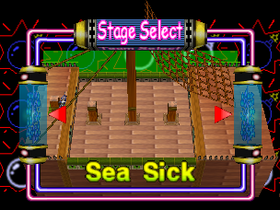