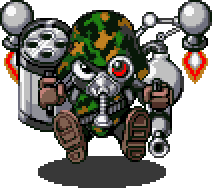 Rocketeer Joe is the third boss of Super Bomberman 4. He is a massive jet pack soldier that shoots missiles and gas.

Joe may perform its poison gas attack multiple times in succession, leading to a screen full of explosive gas. It is usually a good strategy to clear out excessive amounts of gas before it becomes too much of a risk, especially since Joe can detonate it with missiles.

Retrieved from "https://bomberman.fandom.com/wiki/Rocketeer_Joe?oldid=36313"
Community content is available under CC-BY-SA unless otherwise noted.