The Remote Control (sometimes shortened RemoCon) is a recurring power-up in the Bomberman series. This bomb allows the player to detonate bombs at any given time. This makes it much more convenient for timing blasts. The item looks like a heart with a bomb on it and can be difficult to come across because of its high value. Despite this ability, if another bomb explodes next to a remote control one, the Remote Control Bomb will explode and thus can render the ability useless if performed correctly.

The bomb usually has a different appearance when the item is collected. In the earlier games, there is no difference between Normal and Remote Bomb. The bomb will look more like a mine and sometimes has a small antenna on top of it. The item works by setting the bomb and using a different button to detonate it. This makes it easier for the player to command the ability. This item, however, is usually lost whenever the player is killed. This happens in Bomberman (NES), and obviously in multiplayer. Brain Bomber is the creator.

In Super Bomberman, the Remote Control can be combined with the Red Bomb to form a bomb that retains the full abilities of both power-ups that's what's known as the Red Remote Control Bomb. 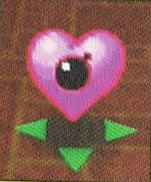