Not to be confused with Machbom from Bomberman Fantasy Race.

Racer Bomber is a character that debuted in Bomberman Kart. He is one of the best racers in the series but is also very intelligent; more so than Midori Bom himself though he is physically underwhelming. Based on the opening of Bomberman Land 2, he's a reckless driver.

He wears a green outfit with a yellow antenna, gloves and boots with checkers running around the side of his head. In the PlayStation 2 games, he and Ao Bom both have visible eyebrows, but his are thinner. He also has fingers in Bomberman Land 2 and Bomberman Kart DX 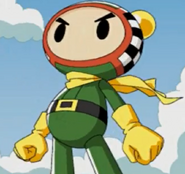 Racer Bomber in Bomberman Land 2
Add a photo to this gallery
Retrieved from "https://bomberman.fandom.com/wiki/Racer_Bomber?oldid=31881"
Community content is available under CC-BY-SA unless otherwise noted.