Pygmin (ピグミン Pigumin) is an enemy in the Bomberman series. It is a small, primitive humanoid creature that typically appears in snowy areas.

Pygmin moves slowly, relentlessly pursuing the player. It will damage players on collision. Periodically, or when it lines up within three tilespaces of a player it will throw an iron ball on a chain at that player. The chain can extend up to three tilespaces in front of the enemy and will hurt players on contact. However, it cannot pass through walls or bombs, so it can effectively be blocked if a bomb is placed before the attack reaches the player. It takes one bomb blast to defeat a Pygmin.[1]

Pygmin moves aimlessly, causing damage to the player on collision. If the player gets too close to it, Pygmin will teleport to another place on the screen. Occasionally, it will stop moving and fire a magic ball at the player. The magic balls chase after the player and will cause damage on impact.[2] Because they must move in arcs in order to turn, they can be evaded if the player moves to the side. Each magic ball will eventually disappear. They also disappear if they collide with a wall.

Pygmin moves slowly and aimlessly. It attacks with its iron ball when it lines up within three tilespaces of the player, and its chain extends up to three tilespaces. It also performs this attack periodically. When it encounters a bomb blast, it will jump to evade it.[3] After jumping, it is unable to jump again for some time. It takes one bomb blast to defeat.

Pygmin has 7 HP and yields the Platinum Armor upon defeat.

This enemy first appeared in an earlier Hudson Soft game, Neutopia II. In that game, it behaves similarly to how it does in Bomberman Tournament. 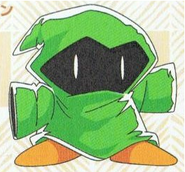 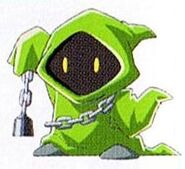 Bomberman Tournament Artwork
Add a photo to this gallery

Retrieved from "https://bomberman.fandom.com/wiki/Pygmin?oldid=38915"
Community content is available under CC-BY-SA unless otherwise noted.