Pretty Bomber is a recurring character in the Bomberman series. She is the only female member of the Five Dastardly Bombers as well as the World Bombers. She was originally one of the first main antagonists of the series, but was later depicted as a friend and even love interest of Bomberman.

At some point in the past, she was involved in a plot on the planet Phantarion in which the Five Dastardly Bombers fought against the world's army and severely wounded Max before being forced back.

In Super Bomberman 2, she and other Dastardly Bombers captured the original Bomberman, but he broke free on their ship. Pretty Bomber appeared as the third boss of the third world, utilizing Heart Bombs. In her boss machine, she did not openly attack Bomberman unless he broke the hearts that her machine created. She was defeated, and fell to Earth alongside the wreckage of her ship.

In the PC Engine version of Bomberman: Panic Bomber, Pretty Bomber returned as one of the last opponents alongside Golem Bomber. She also reappeared in Super Bomberman - Panic Bomber W as a wandering combatant. Believing herself to be the sole survivor of the Dastardly Bombers, she interrupted Bomberman's fight with the World Bombers in order to challenge him and avenge her comrades.[1]

She returned in Super Bomberman 3, revived by Professor Bagura, her master. Pretty Bomber controlled Deep Sea in the Bomber Nebula and guarded the blue Mother Computer Chip. She later returned to battle in the combined mecha at the end of the game, but was bested again and left inside the exploding Battleship. She was also a playable World Bomber in Battle Mode (representing France).

In Panic Bomber, Pretty Bomber is after the Gold Bomber statue, and attacks Bomberman after he has defeated Count Dracu-Boom in battle and gained access to the artifact. She is called "Ms. Flashy" in the North American version of the game.

In the first Bomberman Land, she appears as a minor antagonist that engages in mere mischievous acts. Bomberman tracks her down on more than one occasion to reclaim the goods she steals. In subsequent Bomberman Land titles, Pretty Bomber is on friendly terms with Bomberman and appears as one of the main protagonists of the series.

In Bomberman Tournament, Pretty Bomber finally reunites with her old comrades and returns to Phantarion as the second boss, causing water pollution from Pretty Base. She tries to stop Bomberman for the last time, fusing with Pommy Sea to become PrettyBalloon, but is defeated and forced to flee.

Before the events of Super Bomberman R, the five ended up as deactivated on Planet Scrapheap. Evil Emperor Buggler (Bagura) revived them to conquer the five planets of the Starry Sky Solar System in his name. The Bomberman Bros. (White and Black along with Blue, Red, Yellow, Green, Pink and Aqua) set out to stop the expansion of the Buggler Army's intergalactic conquest and liberate the invaded planets.

Pretty Bomber, as Karaoke Bomber, is encountered on World 4: Planet Lalaland. She teases and flirts with Black when he refuses to fight a girl, but Pink interjects when Black starts turning red. Believing herself to be an interstellar star, Karaoke Bomber initiates her on-foot battle. After being blown clear, she utilizes her robot, Elegant Dream. Afterwards, Karaoke Bomber swears revenge and retreats, dropping a familiar heart-shaped pendant. Pink recognizes it as the same one she gave to their scrapped eldest sister, who had a fatal accident before all of them were built -- revealing that she is in fact Pretty Bomber, the missing ninth member of the Bomberman Bros.

Later, Emperor Buggler is chased to an artificial Black Hole which threatens to engulf the solar system and eventually the whole universe. He summons the Five Dastardly Bombers to form Great Gattaida, which is defeated by the Bomberman Bros. As a last resort, Buggler uses his own power to grow into Ultimate Buggler. The Five Dastardly Bombers finally regained their senses after Great Gattaida was destroyed and voluntarily give their strength to the Bomberman Bros., defeating Buggler for now. Afterwards, the formerly Dastardly Bombers peacefully resumed their previous lives, again on good terms with the people of Planet Bomber.

As a villain, Pretty Bomber is a calculated opponent who relies on her charm to confuse and trap foes.[2] She appears as both a member of the Dastardly Bombers' schemes and as a rival to Bomberman in other ventures. In the Land sequels, Pretty Bomber is a fierce and confident competitor, but her sweet and generous side enabled her to befriend Bomberman. In Super Bomberman R, Pretty Bomber is a good singer and even has a song in the game's credits (sung by her Japanese voice actor) -- but her persona, Karaoke Bomber, has horrific singing, which is played to comedic effect during her Elegant Dream boss battle.

In Super Bomberman 2, Pretty Bomber is fought face-to-face. She actively pursues Bomberman unless bombs are nearby, at which point she will focus on hiding from potential explosions until the danger is gone. Her stats are as follows:[3] 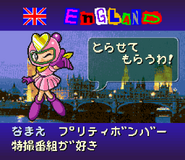 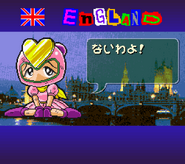 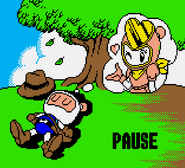 Pretty Bomber in her kart 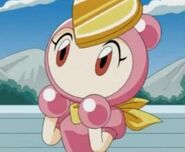 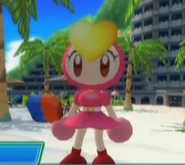 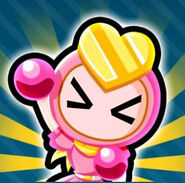 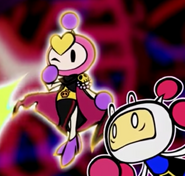 Pretty reunited with her other Bombermen

Pretty Bomber in a rare manga of Bomberman land Touch 2