Pick up and throw Bombs

The Power Glove (パワーグローブ) is an ability upgrade in the Bomberman series. It is sometimes also referred to as the Blue Glove or just Glove. It gives the player the ability to pick up, carry, and then throw bombs.

In most Bomberman games, bombs can only be picked up if you are standing on top of them (i.e. you just sat the bomb). To pick up the bomb, press and hold the bomb button, and your character will raise the bomb above his or her head. Release the button to throw the bomb. Some variations of game mechanics may have the player automatically throw the bomb once it is raised, or will give the player a separate "throw" button, which does not have to be held down and will pick up or throw a bomb when pressed.

Bombs will typically fly in from the other side of an arena if they are thrown out of bounds, due to screen wrapping. This can make the Power Glove especially deadly when players on the other side have very little space to work with. Usually, the Power Glove will be hidden deeper into the field so such easy kills don't come so often, but some post-game minigames allow the player to win a Power Glove, which could be used as such.

In some games (i.e.: Bomberman Blitz ), while a bomb is in a player's hands, the bomb's countdown will continue, and when it should blow up, the Bomberman will automatically throw the bomb; which will blow up once it reaches the ground. This can be abused by it quickly blowing up next to foes.

In some Bomberman games, bombs can be pumped up while held (see: Bomb).

In Bomberman 64, players do not need the glove to carry or throw bombs, and can also pick up items with the "B" button. This can be used strategically in the multiplayer mode, such as picking up bad items, such as the Skull or Evil Items, and dropping them into another player. In a team battle, you can grab your gem to protect it (gems dropped off of the map will respawn without affecting the score). You can also grab good items like Fire-Ups or Bomb-Ups and throw them to an ally.

Rock garden: While the game is played in multiplayer mode the player can drop his team gem into some of the decorative looking trees/cutted trees, the other team couldn't explode your gem anymore, unless if they use a very explosive bomb or they jump to the level border (Border Glitch) 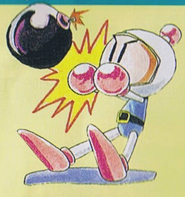