The Ponchos (ポンチヨーズ) are the fourth boss of Super Bomberman 3. There are two boss characters in this battle, a pair of brothers named Thorn and Prickle, who perform attacks both independently and together. Their passenger is Brain Bomber. 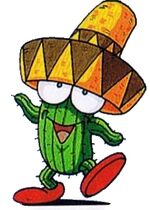 Retrieved from "https://bomberman.fandom.com/wiki/Ponchos?oldid=12658"
Community content is available under CC-BY-SA unless otherwise noted.