Bomberman Jetters
Oyabon is a student of Momo and also old rival of Mighty. He and Mighty both entered the Bomberman Tournament but no matter how hard he tried, Oyabon could not beat Mighty. Later on in his life he opened his own dojo and is now followed by Kobon, his loyal student.

White Bomber once entered the Bomberman Tounament and had to face Oyabon in the semi-finals but White Bomber was distracted with saving Kobon from falling and didn't arrive in time for his match, so Oyabon got to the finals but lost to Zero. He later joins White Bomber to gain Bomb Stars and the Jetters against Dr. Mechado.

Oyabon looks like a large bulky verson of Black Bomber. 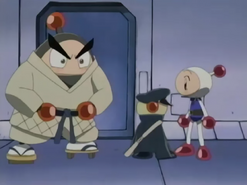 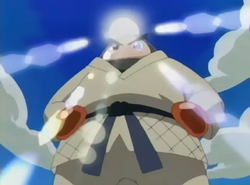 Add a photo to this gallery
Retrieved from "https://bomberman.fandom.com/wiki/Oyabon?oldid=44321"
Community content is available under CC-BY-SA unless otherwise noted.