Ninja Bomber (Bomber Ninja in Japanese and dubbed Ninja Bomberman by Atlus) is a Bomberman who has discipline as a ninja. He first appeared in Bomberman World.

In Bomberman World, Ninja Bomber is a selectable character in Battle Mode. He reacts more quickly than the other characters in the game, and uses his bombs to cover and negate his opponents' attacks.

Ninja Bomber is an assassin who comes from Jibongu, a land at the edge of the world. His offense is similar to that of Bomber Thief. His special ability is the Leap, which allows him to jump over obstacles such as blocks or water, provided that there is a place to land on the other side. Due to this ability, it is difficult to predict his movements, and he often causes confusion on the battlefield.

Ninja Bomber faces White Bomber in the first round of the B-1 Grand Prix. His special bomb is the Shuriken Bomb which acts as a smoke bomb. By throwing many of them at his opponent, he creates a confusing smoke screen. Once the smoke screen is set up, he conceals himself and throws regular bombs. He can also move quickly enough to produce after-image clones of himself, encircling his opponent.

Ninja Bomber is defeated when White Bomber throws a bomb back in his direction after he attacks. He later appears to help other Bombermen challenge the Proto-Max Units. 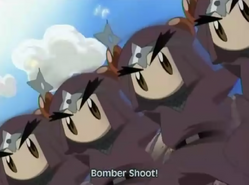 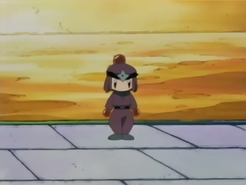 As he appears at the B-1 Grand Prix

Community content is available under CC-BY-SA unless otherwise noted.