Bomberman Jetters
Nightly is a shady, duck-like character who debuted in "Find Treasure Island!" of the Bomberman Jetters anime. Not much is known about Nightly, except that he is an expert at collecting information for his clients, Birdy being his main client.

Nightly is the source of all information regarding the Hige Hige Bandits, Mighty and eventually Max for Birdy throughout the series and is often seen meeting with him. He always wears a trench coat, hat, and sunglasses to hide his appearance. In "Keep Going, Jetters!" he wears a Hawaiian shirt instead of the coat but still wears his other usual attire.

It appears that Nightly has a neutral relationship to both the Jetters and the Hige Hige, as at one point in the anime, he even brings Mujoe and Birdy together who were, at the time, enemies, to exchange information on each other's behalf and for each other's benefit about Max and Mighty, where Mujoe revealed that Mighty was killed.

Nightly was supposedly killed in "Rebirth of the Dark Hige-Hige Bandits" when he was attacked by Max and nothing was left of him except his hat, but he was seen again in the final episode, where it is shown he survived, although sustaining an injury on hand. 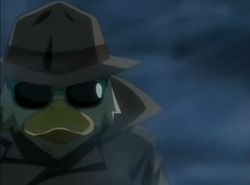 Another View
Add a photo to this gallery
This article is currently a stub. Please help Bomberman Wiki by expanding it.
Retrieved from "https://bomberman.fandom.com/wiki/Nightly?oldid=44376"
Community content is available under CC-BY-SA unless otherwise noted.