Natia is the fourth boss in Bomberman Hero, not counting Nitros. She is one of the Big Four, also known as the Four Devils of Garaden. She is a pink humanoid cat who has a spider-like pet robot named Cronus. As Bomberman enters the temple, Cronus fires the blue laser from its eye to knock Bomberman off and she takes him to prison before Bolban takes care of him. She disguised herself as Princess Millian so Bomberman would get the four disks for her so Nitros could bring Bagular, Bomberman's old enemy, back to life. She is also seen before Bomberman enters the Death Temple at Kanatia Star, as Cronus knocks him out. She is fought and defeated on Mazone Star. She later returns with a duplicate at Garaden Star.

During the first phase of the battle, Bomberman fought Cronus (and has the option of forcing Natia to leave by throwing two bombs at her on her hover platform). He avoided all of Cronus's lasers and his missiles and hit him in the eye until he was destroyed, and then fought Natia. She attacks by whipping Bomberman and throwing three knives at him. As she is smaller than the other bosses, she has no real weak point; any bomb blasts to Natia will damage her. When she is defeated, she does not explode, instead she keeps on "flashing" the way enemies do when they are damaged, and disappears.

She is restored to life by Bagular, and is fought in Boss Room 6 on Garaden Star. Here, she makes a clone of herself and summons smaller versions of Cronus. It is unclear as to who the real Natia is, however, they are distinguishable by their attacks. One only uses a whip, the other only throws knives. Once both Natias are defeated, the battle ends. 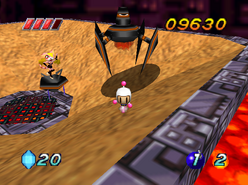 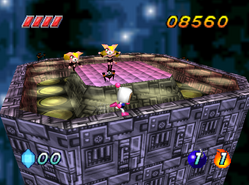 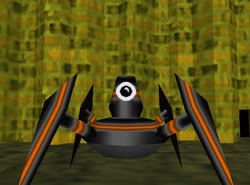 Cronus, Natia's pet
Add a photo to this gallery
Retrieved from "https://bomberman.fandom.com/wiki/Natia?oldid=39972"
Community content is available under CC-BY-SA unless otherwise noted.