Momo is the grandmother of Mighty and White Bomber. She has taught Oyabon and Mighty as students. Momo spends her time living a relaxed lifestyle back in her home on Planet Bomber. In "The Idol Bomberman", it is revealed she was currently training White Bomber until Mighty went missing, where she asked White Bomber if he wanted to join the Jetters in Mighty's place, as they needed a Bomberman.

As the series progresses, her role in the story is expanded on being more than just a minor character, as it is revealed that back in elementary school, both Dr. Ein and Bagura had an attraction to her and would continuously fight for her, but neither one caught her eye and instead, for she had fell in love with another Bomberman, whose name was never revealed. After her husband passed away, Ein and Bagura attempted to win her over once again, however she did not reciprocate their feelings. It was because of this that caused the two "friendly rivals" to constantly fight, eventually both forming the Jetters and the Hige Hige Bandits, respectively.

When Bomber Zero regained his memories, he visits Momo's house. He revealed to her that Mighty wanted to quit the Jetters after his final mission, which resulted in his untimely death. He wanted her to keep his identity a secret from White Bomber. However, she told them both to meet her at the training tower, where White Bomber and Zero met unwittingly, both realizing that they had been stitched up. It is then that White Bomber (eventually) realizes that Zero has Mighty's personalities and memories.

In her debut, she is training White Bomber to become stronger. 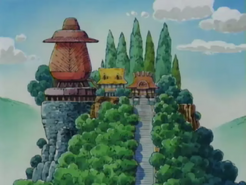 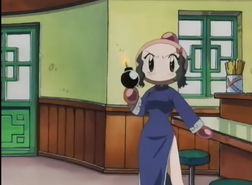 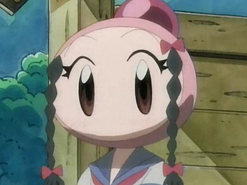 Young Momo
Add a photo to this gallery
Retrieved from "https://bomberman.fandom.com/wiki/Momo?oldid=44248"
Community content is available under CC-BY-SA unless otherwise noted.