Bomb Star of the Sunset

In her debut episode, it is revealed that she is a space thief stealing unique items in the universe, but on a much smaller scale than the Hige Hige Bandits. She is initially perceived as arrogant, selfish, and uses others for her own benefit. Birdy had an especially strong dislike for her, because of her lifestyle choice of being a thief. However, as the series progresses, not only does she become less abrasive towards the Jetters, including Birdy, but it is revealed in numerous flashbacks that she had a flirtatious relationship with Mighty, which included flashbacks of him trying to convince her to join the Jetters crew, and to abandon the space thief lifestyle while calling it a "burglar" lifestyle, and not understanding the difference between the two. However, in another flashback involving a standoff against Mujoe, the badge got broken. Towards the end of the series, she becomes more involved in with the other characters from the sidelines and almost admitted she had feelings for Mighty before she got interrupted by Momo.

She was responsible for finding Bomber Zero, an android with all the memories, personality and abilities of Mighty, who all the characters initially assumed was Max due to his similar appearance.

At the very end of the series, as a long running sentiment throughout the anime, Mighty left her repaired Jetters badge in his locker with a note, and it is assumed that she joined the Jetters afterwards or left on her own journey.

Misty's relationship with other characters in the series.

Somehow during her adventures, she met Mighty and the Jetters. In "Bomb Star of the Sunset," Misty occasionally had flashbacks about Mighty. In one of her flashbacks, she attempted to make her getaway with a unique item from the Hige Hige but was shot down before being caught by Mighty in mid-air. Mighty took back the ruby necklace she had stolen, but she mischievously retrieved it by faking an injury and drove away in Mighty's vehicle.

In the flashback episode "Misty's Big Plan," her flirtatious relationship with Mighty is revealed. After finding her stealing the unique flower-scented natto, Mighty and Misty fall into a booby-trap into a waste disposal area. Trapped, Mighty, in an apologetic and respectful manner, attempts to bring Misty out of her burglar lifestyle, which irritated Misty even more by correcting him to refer her as a space thief. Mighty insists she join the Jetters while saying how happy he will be if she accepts. He gives her a Jetters badge, although her mind has not yet been cleared from Mighty's cheerful attitude. 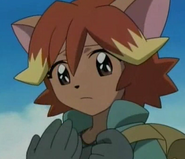 Another view of Misty 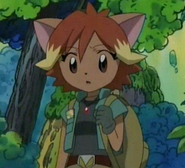 Misty blushing
Add a photo to this gallery
Retrieved from "https://bomberman.fandom.com/wiki/Misty?oldid=44343"
Community content is available under CC-BY-SA unless otherwise noted.