Magnet Bomber is one of the Five Dastardly Bombers and is a recurring villain in the Bomberman series. He is a bad bomber with an affinity for magnets. He wears a blue (turquoise in Super Bomberman R) armor, a blue or white cape-like scarf-like, and a magnet emblem on his helmet. His bombs are magnetically attracted to robotic life-forms. In Super Bomberman R, Magnet Bomber's gloves are each colored as red and blue, a reference to the different colored poles on a magnet.

He is a Bomber-Cyborg, a being given the ability to plant bombs like Bombermen. In every one of Magnet Bomber's appearances, he has always been the first boss to be taken down.

At some point in the past, he was involved in a plot on the planet Phantarion in which the Five Dastardly Bombers fought against the world's army and severely wounded Max before being forced back.

In Super Bomberman 2, he and other Dastardly Bombers captured White Bomberman and put him a prison cell in Magnet Bomber's base. Bomberman awoke in the dungeon and fought his way through the base to a final showdown with Magnet Bomber himself. Defeated, Magnet Bomber fell to Earth alongside the wreckage of his ship.

He returned in Super Bomberman 3, revived by Professor Bagura, his master. Taking control of Swamp Attack in the Bomber Nebula, he challenges White Bomberman and Black Bomberman and is defeated again. He later returns to battle in the combined mecha at the end of the game, but again he is bested and left inside Bagura's exploding Battleship.

He and the rest of the Dastardly Bombers returned to Phantarion many years later in Bomberman Tournament to follow through with their old plot, but revised plans based on their previous mistakes. The plan worked, and they ruled over the planet for about one year until White Bomberman came to stop them. Magnet Bomber holds his position at Magnet Base near Beta and tried to defeat White Bomberman by fusing with the Karabon Pommy Fangs and turning into a dragon, but was defeated again. After escaping, he informs Pretty Bomber that Bomberman is heading in her direction.[1]

Before the events of Super Bomberman R, the five ended up as deactivated on Planet Scrapheap. Evil Emperor Buggler (Bagura) revived them to conquer the five planets of the Starry Sky Solar System in his name. The Bomberman Bros. (White and Black along with Blue, Red, Yellow, Green, Pink and Aqua) set out to stop the expansion of the Buggler Army's intergalactic conquest and liberate the invaded planets.

Magnet Bomber is encountered on World 1: Planet Technopolis. He begins to make a grand, boastful speech about his stages, but is interrupted by Red, who blasted his way in. Taking offense at Red calling him a little guy and White calling him just a kid, Magnet Bomber initiates his on-foot battle. After being blown clear, he utilizes his robot, Iron Gauss. Afterwards, Aqua pleads to stop the fighting, but is rudely knocked out of the way by Magnet Bomber's careless punch as he gloats. Red realizes he shouldn't have done that, but it's too late; Aqua retaliates with an unladylike uppercut that launches both Magnet Bomber and Red into the stratosphere, to Black's amusement and Pink's chagrin.

Later, Emperor Buggler is chased to an artificial Black Hole which threatens to engulf the solar system and eventually the whole universe. He summons the Five Dastardly Bombers to form Great Gattaida, which is defeated by the Bomberman Bros. As a last resort, Buggler uses his own power to grow into Ultimate Buggler. The Five Dastardly Bombers finally regained their senses after Great Gattaida was destroyed and (though Magnet Bomber shows begrudging reluctance to this plan) voluntarily give their strength to the Bomberman Bros., defeating Buggler for now. Afterwards, the formerly Dastardly Bombers peacefully resumed their previous lives, again on good terms with the people of Planet Bomber.

In one of the pictures in the end credits of the game, Magnet Bomber is seen playing video games with Red.

Magnet Bomber is always the first boss faced in a game featuring the Five Dastardly Bombers. In the manual manga for Super Bomberman 3, he calls White Bomberman "naive" for thinking it would be easy to retrieve the Mother Computer Chips.[2] In Bomberman Tournament, he gloats about supposedly defeating Max, when in actuality it was Plasma Bomber who accomplished that task.[3] He also seems surprised that White managed to find him, and calls Max a "big mouth".[4] He seems overconfident about himself and is cocky, despite his failures and runt-like stature. This is reaffirmed in Super Bomberman R, where he displays an unwarranted sense of pride but is prone to anger and panic. He is shown to hate being ridiculed by his small size.

In Super Bomberman 2, Magnet Bomber is fought face-to-face. He actively pursues Bomberman unless bombs are nearby, at which point he will focus on hiding from potential explosions until the danger is gone. His stats are as follows:[5] 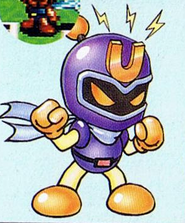 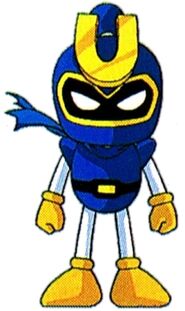 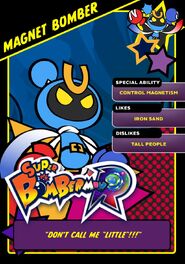 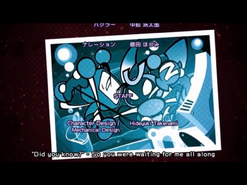 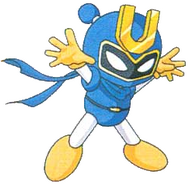 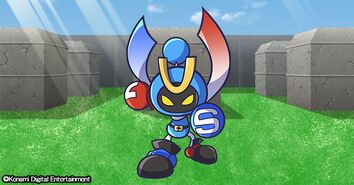 Add a photo to this gallery

Retrieved from "https://bomberman.fandom.com/wiki/Magnet_Bomber?oldid=44340"
Community content is available under CC-BY-SA unless otherwise noted.