Mad Flower (マッドフラワー) is an enemy in the Bomberman series. It typically appears as a flower with a large mouth and sharp teeth.

Mad Flower remains stationary in the middle of the screen, summoning two small flowers to attack Bomberman. The small flowers pursue Bomberman relentlessly. They can be defeated with two bomb blasts, but Mad Flower will summon another flower to replace any that have been destroyed. Mad Flower has 4 HP and yields a Fire item upon its defeat.[1]

Its behavior is identical in Bomberman Max 2.

Mad Flowers come in groups of three.[2] They spin around in a circle, gradually increasing and then decreasing their range. As a group, they also move up and down slowly. Each Mad Flower has 1HP. They can all be taken out with one explosion while they are crowded together. 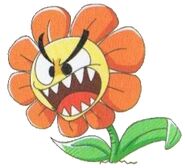 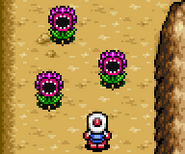 Retrieved from "https://bomberman.fandom.com/wiki/Mad_Flower?oldid=38893"
Community content is available under CC-BY-SA unless otherwise noted.