Bomberman Jetters
Louie is a character that was first introduced in Bomberman Hero.

Louie has appeared in quite a few games, and even the Bomberman Jetters Anime (known as Rui), where he appeared younger.

He also appeared in the Bomberman Land games, with a chibi style just like the rest of the cast. 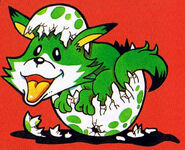 Louie in Pixel Puzzle Collection
Add a photo to this gallery
Retrieved from "https://bomberman.fandom.com/wiki/Louie_(character)?oldid=41507"
Community content is available under CC-BY-SA unless otherwise noted.