Lost at Sea (ツルツルガラス, Slippery Glass in Japan) is the tenth and final stage in the Battle Mode of Bomberman 64. It is unlocked when all 120 Gold Cards have been collected and all six worlds have been cleared in the Story Mode. The main trap here is a Sliding Floor of glass, which covers the majority of the stage. The only ordinary floor is on the outer edges of the map. There are six Soft Blocks present at the onset of the match.

The glass floor inhibits movement, making it difficult for players to start walking and causing a delay in turning. Kicked bombs are also subject to the same effects, so throwing bombs is a more effective strategy. Due to the difficulty of movement, large explosions from Pumped or Red Bombs are harder to escape. One possible strategy is to kick bombs at opponents who are already trying to escape another explosion, chaining the blasts and eliminating them. Players may also be thrown out of the stage and into the surrounding water. 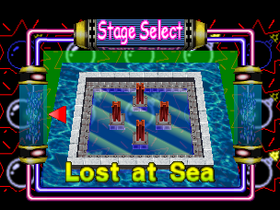 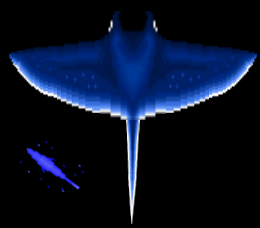 Some fish can be seen swimming through the water below the glass.
Add a photo to this gallery
Retrieved from "https://bomberman.fandom.com/wiki/Lost_at_Sea?oldid=35965"
Community content is available under CC-BY-SA unless otherwise noted.