The Kick or Bomb Kick (also called Whip in a story mode of Bomberman GB 2) is a recurring item in the Bomberman series. It gives the player the ability to "kick" bombs by walking into them, which sends the bomb sliding across the stage until it collides with a wall, player, or another bomb.[1]

The Kick is the most common item used to help players escape from a bomb trap. It is also a great offensive weapon. Bombs can be kicked as far or short a distance the player desires - a sliding bomb can be halted by the press of a button (varying from game to game). Kicked bombs can also switch directions if they slide onto an Arrow floor tile.

To combat a Kick-wielding opponent, remember at least two things. Firstly, in most games kicked bombs will stop if they hit a stationary bomb. Use this to your advantage, especially when blocking kicked Rubber Bombs. Following the same logic, a player with a Kick item cannot escape a trap if the bombs are doubled up, meaning there are two bombs in a row on the side of the player. They cannot kick the first bomb because the second bomb is in the way. This is negated if the player has a punch, though it can still be effective as the trapped opponent will lose time escaping and may still be caught in the fire.

In Bomberman Quest, the Bomb Kick is known as the Combat Boots in the English versions, and is an equippable item.[2] 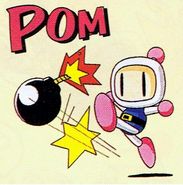 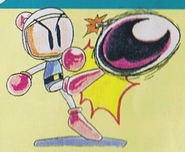 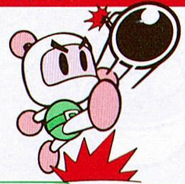 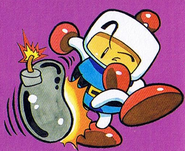