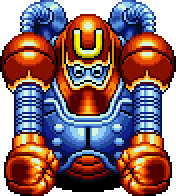 Iron Gigue is the first boss in Super Bomberman 2. Its passenger is Magnet Bomber.

Attacking from the front, multiple bombs can be chained in intersections across a row, so that they will explode simultaneously and hit Iron Gigue while it is moving. Another option would be to predict where the boss will make its next stop, and place bombs horizontally between blocks, so that the ensuing explosion only extends upward and downward, allowing for more free movement and evasion.

Attacks can be dealt from the sides of the boss as well, but these are more difficult to pull off because bombs will be eliminated if the boss passes over them. With a very large blast range, a bomb can be placed on one of the rows containing Iron Gigue while the boss is moving in the opposite direction. However, if the bomb is not far enough away, it is entirely likely that the boss will continue movement and destroy the planted bomb. It is suggested to attack from the front.

As Iron Gigue takes damage, it turns more and more grey, eventually emitting smoke. Players can use this as an indicator of how close they are to defeating the boss.

Retrieved from "https://bomberman.fandom.com/wiki/Iron_Gigue?oldid=41284"
Community content is available under CC-BY-SA unless otherwise noted.