Ice Tower is a recurring enemy in the Bomberman series. It is an ice monster that appears in snowy areas.

Ice Tower moves at a normal pace and tends to stay in a certain part of the map. When it dives underground, it is invulnerable and can move around.[1] Periodically, it will rise up and remain on one tilespace for a while before diving back into the ground and repeating the process. While it is above ground, if a player lines up horizontally or vertically with it, it will spit out concentrated cold air, which appears as a star and flies in the player's direction.[2] The cold star will damage player on collision, but it can be stopped by bombs and other obstacles. Ice Tower will spit at a player even if there are obstacles between it and the player. If a player remains in its line of sight after it has already spat, it will not spit again.

In Bomberman Tournament, Ice Tower's movement pattern is similar to that of its previous incarnation.[3] shoots a bolt of ice instead of a star, and it can only shoot once before returning underground again. In addition to damaging the player, the ice shot also freezes bombs on contact. Frozen bombs can be kicked or detonated by other bombs, but are otherwise dormant. Ice Tower Jr.'s only move at a normal pace in this game. If an Ice Tower has been blasted and there are Ice Tower Jr.'s remaining while the player moves to a different screen, the Ice Tower will still not respawn if the player returns to the screen that it appeared on. 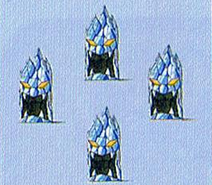 Bomberman Tournament Artwork
Add a photo to this gallery

Retrieved from "https://bomberman.fandom.com/wiki/Ice_Tower?oldid=43436"
Community content is available under CC-BY-SA unless otherwise noted.