The Ice Bomb is a bomb made of ice. It can be used to freeze water spouts to either create bridges or stop objects associated with the water.

The Ice Bomb is formed when an Ice Shard is fused with an Explosive Core in the Bomb Workshop. It explodes in a cross-shape. Anyone who is caught in its blast will be frozen for a certain amount of time. It is even more effective when it is thrown with the Power Glove in order to stun an opponent, ensuring that the opponent is caught in the blast.[1]

The Ice Bomb can be used when Bomberman has the Water Stone equipped. It has a circular explosion and is able to freeze water or certain objects and enemies.[2]

The Ice Bomb explodes with freezing water. It is formed when the Ice Shard is fused with an Explosive Core in the Bomb Shop. It is used to freeze water spouts and form bridges.

In the Bomberman Jetters anime, the Ice Bomb is used to freeze water. One was used in episode 29, in which White Bomber froze the lake. However, his Ice Bomb was not strong enough to freeze the water.

Another Ice Bomb was used by Mighty in episode 31, in which Mujoe set off rushing water in the basement of their headquarters. Mighty protects himself and Misty from the rushing water by using an Ice Bomb. Unlike White Bomber's Ice Bomb, Mighty's Ice Bomb was strong enough to freeze the entire basement. 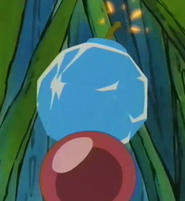 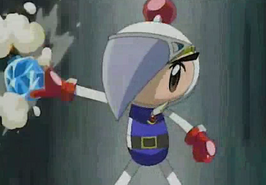 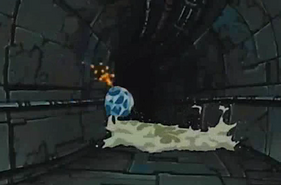 The Ice Bomb is thrown 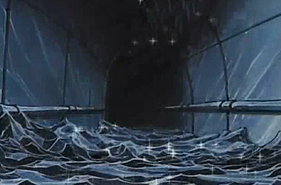 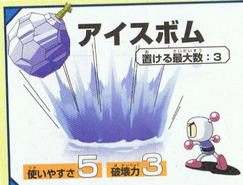 Ice Bomb Art from TSA
Add a photo to this gallery

Retrieved from "https://bomberman.fandom.com/wiki/Ice_Bomb?oldid=41199"
Community content is available under CC-BY-SA unless otherwise noted.