Bomberman Jetters
The Hyper Plasma Bomb is Max's signature bomb in Bomberman Jetters. In the anime, Max developed the bomb with Mighty's combat data. In the game, while playing as Max, the player can use it to destroy certain doors and wipe out many enemies in a single hit while on screen. However in boss battles (or against resilient minor enemies) it can only deal a small amount of damage (the same amount as a standard bomb that the enemy in question is not weak to).

Differences Between the Anime and Game Versions

The anime version differs greatly from the game version. The anime depicts it as a ball of red energy emitting four red bolts of electricity on an "X" shape. The game shows it as a light blue ball with small sparks of lightning around it. Also, Max is shown to be capable of instantly summoning it while the game requires Max to charge it for seven seconds. 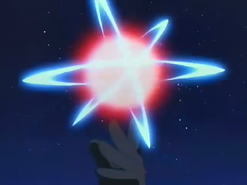 Another View of the Bomb as it charges
Community content is available under CC-BY-SA unless otherwise noted.
Advertisement