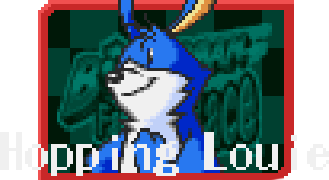 "This Louie's speciality is a fast dash! If you learn how to handle him, getting into the top ranks will be a cinch!"

The Hopping Louie is one of the animal choices in Bomberman Fantasy Race, and the cheapest along Brave Tirra.

Having an excelent dash, seasoned players can use his abilites to surpass and maintain the top position if he is used skillfully, but beginners too have a higher ground using him against the earlier, low-level CPU opponents.

In the JP version of the game, adquiring this animal cost the player 100 GB, but in the US version this price was increased tenfold, 1000 GB.

Retrieved from "https://bomberman.fandom.com/wiki/Hopping_Louie?oldid=34760"
Community content is available under CC-BY-SA unless otherwise noted.