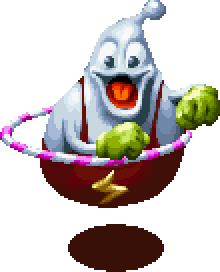 Hoop Ghost is the first boss of Neo Bomberman. It appears in the final area of Stage 1.

By placing bombs before walking under the boss and causing it to drop, there is a better chance that the bombs will explode before the boss rises. This becomes a necessary strategy as Hoop Ghost takes more damage and spends less time on the ground.

Retrieved from "https://bomberman.fandom.com/wiki/Hoop_Ghost?oldid=24471"
Community content is available under CC-BY-SA unless otherwise noted.