Honey, also known as Miss Honey, is one of Hudson Soft's mascots and a recurring character in the Bomberman series.

Master of Kotetsu and friendly rival and friend of White Bomberman, she is a professional bounty hunter, as well as a cowgirl. Despite her strong personality, she is a good person.

Being primarily a multi-player only character, existing to fill up a slot in the roster, she rarely takes part in the games' plots.

Some time before her first appearance, she accepted Kotetsu as her disciple, becoming his mentor and master, making him train very hard and do everything she wants, as "part of his training". Just like everyone else she meets, she doesn't treat him with much respect, with repeated beatings, both verbal and physical.

In Super Bomberman 4, she was in a bus-like ship with White Bomberman, Kotetsu, and fellow bombers when Bagura, trying to get revenge on White and Black Bomberman, summoned the Four Bomber Kings and Bomber Great to send the ship and all the passengers back in time. Honey was sent to the Modern Period and imprisoned in a cage by Lady Bomber, but in the end was rescued by White Bomberman and Black Bomberman and returned to her time with fellow bombers after the fall of Bagura.

In Super Bomberman 5, she and her partner are controlled by Terrorin and end up becoming bomberman's enemies and one of the possible secret chiefs. She moves at random speed depending on which world is battled, constantly searching for the player dodging bombs. If she aligns horizontally or vertically with the player and there were no obstacles between them, she will draw her weapon, and will shoot in the player's direction, the bullet will harm the player in the collision, but it can be eliminated with an explosion or using a bomb is like an obstacle.

In Neo Bomberman, she was one of the many combatants who gathered together for the Bomberman Tournament. Bagura arrived in a mechanical machine and kidnapped her. She was trapped in a cage until she finally was released by the White and Black Bomberman.

In Saturn Bomberman Fight!! she was invited to a tournament known as the "Bomber Convention", a tournament of the 18 strongest bomb warriors in the world that would grant one wish to the winner, and decided to participate to get herself some vast riches (such as a reward for capturing Golem Bomber), but in the end she was defeated.

She also made an appearance in Bomberman GB 3 where she ran a shop that Bomberman could use to get new power ups.

Despite her looks, Honey is a selfish, ferocious, violent, hot headed and gung-ho professional bounty hunter, showing very little consideration to others if they stand in her way, not treating them with much respect. 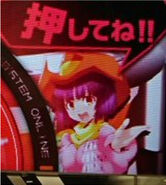 Honey in Bombergirl (Not a playable character)

Honey in Bomberman Wars
Add a photo to this gallery
Retrieved from "https://bomberman.fandom.com/wiki/Honey?oldid=43185"
Community content is available under CC-BY-SA unless otherwise noted.