The Heart (sometimes called the Life-Up or Revive) is an item that appears in many Bomberman games, starting with the very first game in the series. It allows the player to survive one bomb blast, enemy attack, or damaging trap while it is in their possession, and thus preventing them from losing directly a life. The maximum amount of Hearts that the player is allowed to carry varies from game to game.

In some Battle Games, the player may set up to 5 handicap Hearts to any human or CPU player, and up to nine Hearts can be set to appear in Soft Blocks.

In most games, the Heart disappears when the player is struck, but in the Battle Mode and the Normal difficulty setting of Bomberman 64's Adventure mode, Hearts are knocked out of both Bomberman and the rival bosses. They can then be recollected and reused if picked up again. However, only one can be held at a time.[1]

In the more recent games that feature a life meter, the Heart refills generally one lost unit of Bomberman's life (3 for Bomberman Quest).

In some Bomberman games, such as Bomberman Blast, a number of red hearts beside the name of each player displays how many Hearts that player has. 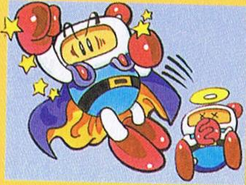