Guardi (ガーディー, literally Gādī or Guardy) is an enemy from Super Bomberman 2. It appears in Stage 3.

Guardi appears to an eye in an armor suit (made of a substance which is immune to bomb blasts) that moves via the jetpack on it's back.

Guardi moves slowly in a straight line until it collides with a block, bomb, or other enemy, at which point it pauses and then chooses a random direction and continues to move. It may choose to reverse directions even if it is not at a dead end. It will harm the player on collision.

Guardi is completely invincible to both bomb explosions and tossed bombs. As a result, upon encountering the enemy, the player's only option is to evade it. It may be trapped with bombs in order to allow more time for the player to pass through or make an escape.

Guardi can only be defeated if all of the "HP Switches" in the stage have been activated. HP Switches behave similarly to the Capsules from the first and second stages of the game in that a single bomb blast will activate them, at which point they will remain activated for the duration of the stage. Bombs cannot be set or thrown on them.

When the Exit is hit by an explosion, Guardi will not be respawned. 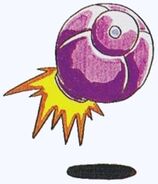 U.S. manual artwork
Add a photo to this gallery

Retrieved from "https://bomberman.fandom.com/wiki/Guardi?oldid=38250"
Community content is available under CC-BY-SA unless otherwise noted.