Not to be confused with Speed Down, another speed decreasing item.

The Geta (ゲタ), also known as the Clog or Down Shoes is a recurring trap item in the Bomberman series. It decreases the player's speed by 1. It is one of the most common "bad" items used in the games. It is also usually the only real "bad" prize in post-battle minigames.

Avoid Geta items when possible, unless you can use them to your advantage. If you feel that you have too much speed and are having difficulty controlling your character, you may want to pick up a Clog. This would be a rare case, though.

Also, in some games, you can pick up items and throw them at other players. Geta panels (like Virus items) are great throwing material. In certain Bomberman games, throwing a Clog item on another player's head will stun the other player. 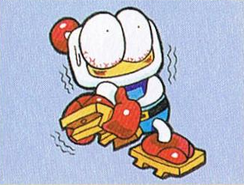