The best way to damage this boss is to lay Hurricane Bombs near Genbu's tortoise head when it pops out. He will recede and he will spin around, chasing the player. He also will project a cannon out of his shell and shoot projectiles as a counterattack, but as long as the player keeps moving, they can avoid them. If a bomb is placed in the proximity of the snake head, it will inhale the bomb and deal damage to itself. If the player wanders near the snake's tail, it will extend it out and sway it back and forth like a whip several times, knocking away any planted bombs as well.

Genbu's shell spin is similar to that of the giant monster Gamera. 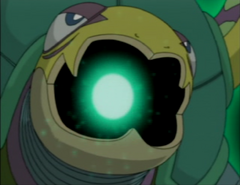 Another View
Add a photo to this gallery
Retrieved from "https://bomberman.fandom.com/wiki/Genbu?oldid=33014"
Community content is available under CC-BY-SA unless otherwise noted.