Field of Grass (くさばのかげで, Behind Blades of Grass in Japan) is the sixth stage in the Battle Mode of Bomberman 64. It is a valley in which the bottom is covered in thick grass. The grass comes up to about the middle of a Bomberman, and almost completely conceals normal bombs. As a result, it can be hard to tell when and where a bomb will explode.

Players may attack from the slopes at the sides by kicking bombs into the grassy valley. In this manner, the player can conceal his or her bombs while being positioned in a clear area. Generally, normal bombs offer an advantage over pumped bombs in this stage, because pumped bombs cannot be concealed in the grass.

Another tactic is to pick up opponents' bombs right when they are placed. This helps to keep the player from being caught off guard. The bomb can then be thrown at an opponent or out of the stage. Stunned opponents may also be thrown out of the top or bottom of the stage and into the surrounding pits. 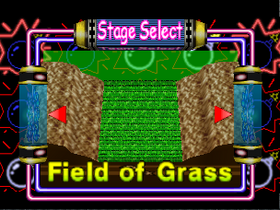