Fairy Bomber (Bomber Fairy in Japanese and dubbed Fairy Bomberman by Atlus) is a Bomberman who takes the appearance of a fairy. She first appeared in Bomberman World.

In Bomberman World, Fairy Bomber is a selectable character in Battle Mode. She does not cause much trouble until she is threatened, at which point she becomes a much more dangerous competitor.

In Bomberman Wars, Fairy Bomber is a fairy that is native to Bomberland. She can use the wings on her back to fly over and hover above water or lava as if they are ordinary floor tiles. With this special trait, Fairy Bomber is able to more easily escape from danger and more quickly progress through maps that are covered in water or lava.

Fairy Bomber makes a brief appearance in the Bomberman Jetters anime entering the B-1 tournament. 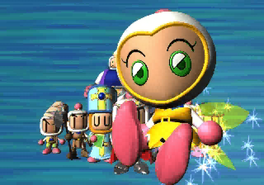 Bomberman Wars Opening
Add a photo to this gallery

Retrieved from "https://bomberman.fandom.com/wiki/Fairy_Bomber?oldid=41145"
Community content is available under CC-BY-SA unless otherwise noted.