The Egg (タマゴ) is an item that appears in some Bomberman games. A player who touches an Egg will mount the ridable character that is inside of it. Each ridable character has its own special ability and will be sacrificed when hit by an explosion in order to save the riding player.

Eggs are typically discovered by destroying Soft Blocks, but in some games, certain enemies in the Normal Mode will become Eggs upon defeat.

In some games, Eggs come in two variations: biological and mechanical. Ridable characters come from one Egg type or the other.

In games that include both Egg types, a player who has a ridable character may collect two more Eggs of that monster's type, which will link up and follow the player.[1] If the player's ridable character is destroyed and one of his or her linked Eggs survives, the ridable character in that Egg will immediately become the player's next mount. Eggs that are linked behind a player may be destroyed by explosions, and in some cases, other players may steal them by touching them. By pushing against a wall, a player's stock Eggs will move beneath him or her; this can be used to protect stock Eggs from such dangers.[2] 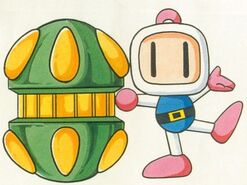 A mechanical Egg from Super Bomberman 4 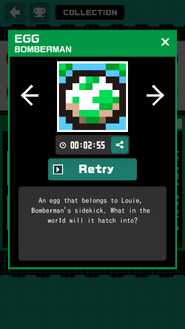