Eagle Bomber, also known as Prince of the Wind, is a character of the Bomberman series and a boss of the game Bomberman Generation.

Eagle Bomber is a member of the Crush Bombers and refers himself as the "Blue Falcon" of the group, having a pair of silver wings on his back which double as a jetpack. His boss stage is Tako's Coliseum, an open fighting arena located in TakoDesert, built with enough room for Eagle Bomber to move and fly around due to his preferences.

After White Bomberman arrives in Tako's Coliseum to retrieve the yellow Bomb Element, he is immediately trapped and hears roaring laughter from Eagle Bomber, who is found hovering with his jetpack on one of the arena's pedestals. Eagle Bomber introduces himself and promptly identifies White Bomberman as the culprit responsible for foiling Mujoe's plans. He challenges the young bomber to a battle and launches himself into the air, before descending at ground level.

Upon defeat, a severely injured Eagle Bomber attempts to stand. After commenting on the beauty of scattering rose petals, he collapses into an eagle's position and explodes immediately after. White Bomberman turns away to shield himself from the explosion and moves on.

Eagle Bomber is a flamboyant, arrogant, and brash fighter who harbors a love for flying. He is extremely proud of his ability to fly and tends to place complete confidence in his own abilities, believing that the skies give him a distinct advantage over his foes. He bears no shame in proclaiming how great he is, and has equally no trouble proving it.

However, Eagle Bomber's main weakness is his own pride. Because of his confidence, he fails to acknowledge White Bomberman's strength and cunning. This later leads to his defeat and death as White Bomberman, despite being at a heavy disadvantage, was able to outmaneuver Eagle Bomber and take him out with his bombs.

Despite his bombastic personality, Eagle Bomber is loyal to Mujoe, whom he refers to as his "master". His last words in his ending cutscene implies an artistic and poetic side, as he comments on the beauty of falling rose petals.

Eagle Bomber is able to fly through the use of a special rocket jet pack that also utilizes a pair of silver/dark blue wings for extra mobility.

Eagle Bomber is hinted to be a decent close-combat fighter. He is capable of sneaking up behind White Bomberman and trapping him in a shoulder lock, before executing his Piledriver attack.

Though it isn't specified or looks like any other bomb White Bomberman can cook up, Eagle is able to produce several bombs which he can drop onto his opponent in a carpet-bombing manner.

Eagle Bomber jettisons himself towards White Bomberman at a fast speed, surrounding himself in blue energy while flying a fast speed in a lazy, haphazard, horizontal drilling motion. Very easy to avoid.

Eagle Bomber will call out the name of said attack as a warning, and spin around like a top at a speed faster than Eagle Comet, using his jet pack's wings as bludgeoning weapons. A little unpredictable than Eagle Comet, but easy to avoid nevertheless.

Eagle Bomber will ascend high into the air and laugh tauntingly before flying out of the arena. He appears shortly after to attack White Bomberman by carpet-bombing the entire area with several explosives in a random, hard-to-maneuver-through pattern.

Eagle Bomber will shout "Burn!" at White Bomberman and hover even higher above the arena's floor with his jet pack's afterburners burning at full power. He will float all over the arena, using a pair of large vertical flames flowing from his jet pack to try incinerate White Bomberman.

Prince of the Wind; Blue Falcon of Crush Bombers 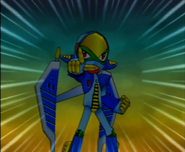 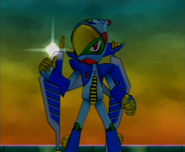 Render
Add a photo to this gallery
Retrieved from "https://bomberman.fandom.com/wiki/Eagle_Bomber?oldid=39592"
Community content is available under CC-BY-SA unless otherwise noted.