Dolphin Bomber was created to find the unique perfume by Dr. Mechado. She was capable of fending off the Jetters. However, White Bomber, Bongo, and Gangu devised a plan to have her jump through a hoop, in which her dolphin instincts would react to. At the midst of jumping through the hoop, White Bomber threw a bomb at her and reverted her back into a normal dolphin.

Dolphin Bomber's appearance is that of a dolphin and like all Bombermen, she has an antenna in place where her dorsal fin should be. She also wears a pink-with-red-polka-dots inner tube, ruby red lip stick, and scallop shells on her bosoms. Her Skin is a light blue with a white patch covering most of her body. Her bluish patch forms a curly-q on either side of her head. 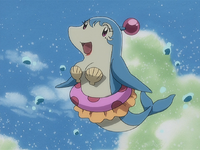 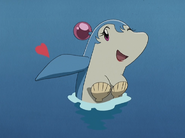 Dolphin Bomber jumps into the hoop

Dolphin Bomber enjoys jumping into the hoop
Add a photo to this gallery
Retrieved from "https://bomberman.fandom.com/wiki/Dolphin_Bomber?oldid=44443"
Community content is available under CC-BY-SA unless otherwise noted.