In her debut appearance in Bomberman Land, Dark Witch is met by White Bomberman and his companions in the Tower of White Zone where she is challenged to compete in a classic boss fight. It takes three hits to defeat Dark Witch. She dodges attacks by floating off of the ground.

In Bomberman Land 3, Dark Witch acts as a member of a team of villains led by Dark Bomber. She, along with her fellow villains, was ordered to defeat Cheerful White and his friends.

In her most recent appearance in Bomberman Land Portable, Dark Witch acts as the first boss of the game. She was ordered by Dark Bomber to brainwash everyone in Red Zone, the zone she is also fought in. As she tells Cheerful White moments before the boss fight, she disguised herself during the time she stayed in the park. Upon arrival, she challenges the player to beat her score in the Mallet Mayhem II minigame. After she is defeated, she escapes and is later met again in White Zone where she challenges the player a second and last time. 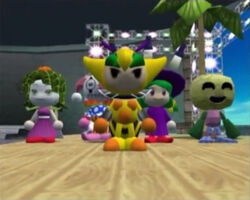 A team of villains led by Dark Bomber
Add a photo to this gallery
Retrieved from "https://bomberman.fandom.com/wiki/Dark_Witch?oldid=33351"
Community content is available under CC-BY-SA unless otherwise noted.