Super Bomberman 2
Dark Stage is the fifth and final stage in Super Bomberman 2. It is Plasma Bomber's domain in the Dastardly Bombers' ship. In all but one of the normal stages, each room is completely dark when the stage begins. There are many hidden traps scattered throughout.

The Capsules in this stage will activate or deactivate when they are hit with an explosion. They must all be activated at the same time in order to clear the stage. The Soft Blocks in this stage may respawn after having been destroyed, provided that there are no items, bombs, or other obstacles on top of them.

After the Plasma Bomber was defeated, the base exploded. Its remains fell to Earth. 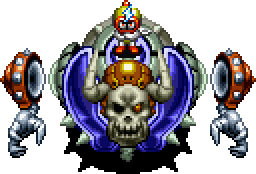 Retrieved from "https://bomberman.fandom.com/wiki/Dark_Stage?oldid=40574"
Community content is available under CC-BY-SA unless otherwise noted.