—Daibon, in the anime, Bomberman Jetters

Daibon is an awkward man. He appears in the anime, Bomberman Jetters, debuting in "The Idol, White Bomber." He is easily scared and cannot properly throw a bomb. Daibon is Pui's, who is another Rooi, owner.

Pui left Daibon's side due to the fact that Daibon lacked the necessary skill and ability to earn respect for himself as a Bomberman. Pui wanted to be the apprentice of White Bomber, but Rui said that he was White Bomber's owner. During a race to prove who is faster, Rui or Pui, White Bomber saw Daibon spying on Pui. After White bomber caught up to Daibon, he explained why he was spying on Pui. White Bomber agreed to help Daibon get Pui back by pretending to lose. However, when Daibon threw the bomb, White Bomber fainted and fell into the water. Pui still didn't want to go, but after a talk from Rui, Pui agreed and left.

Daibon is then seen again when White Bomber and Oyabon wanted to go get another for their sixth and seventh bomb star, respectively. However, only White Bomber managed to gain a bomb star.

Once again, he assisted the Jetters to protect the Hige Hige Bandits' invasion of Planet Bomber. He tagged along White Bomber, Birdy, and Zero to investigate the crash site, discovering the Proto-Max Units. Daibon faces off Proto Max Jr. but was incapable of attacking it. After the Proto-Max Units retreat, everyone moved to Planet Jetters to destroy the units and the arms that would soon collide with Planet Bomber. 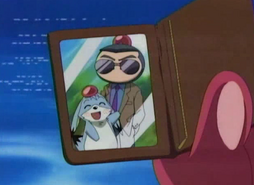 A photo of Daibon and Pui 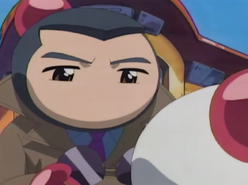 Daibon without his glasses
Add a photo to this gallery
Retrieved from "https://bomberman.fandom.com/wiki/Daibon?oldid=44320"
Community content is available under CC-BY-SA unless otherwise noted.