The Core Mechanism (コアメカ), or Core Mecha, is a key gameplay element in some Bomberman games. Collectively, they act as a level objective. 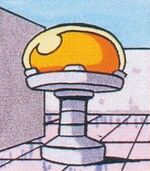 In each stage, Core Mechanisms are scattered about. Some are stationary, while some may be carried by enemies. They behave similarly to Soft Blocks in that they block pathways and can be destroyed, but they cannot be kicked by yellow Rooi, and they cannot be passed by players or enemies possessing the Block Pass ability.

In Super Bomberman 2, the Capsule (カプセル), also known as Switch (スイッチ), provides the same function as the Core Mechanism does. Capsules differ from Core Mechanisms in that they act as a regular, passable floor tile, although bombs cannot be set, thrown, or kicked onto them. They do not yield any score bonus. Once all of the Capsules in a stage have been activated, and all enemies have been destroyed, the exit will open.

There are two types of Capsules:

In Stages 1 and 2, these Capsules must be hit with one explosion and they will be activated.

In Stages 3, 4, and 5, these Capsules switch on or off when they are hit by an explosion. They must all be turned on in order to open the exit. Once they are all on, even if there are remaining enemies and the exit has not yet opened, they will no longer be affected by explosions.[2]

Retrieved from "https://bomberman.fandom.com/wiki/Core_Mechanism?oldid=38463"
Community content is available under CC-BY-SA unless otherwise noted.