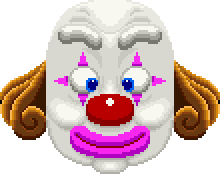 Clown Mask (ピエロマスク) is an enemy in Super Bomberman. It is the boss of the second world. It is a large clown face.

Clown Mask moves at a slow speed of 1, passing over all obstacles and pursuing the player. Rather than instantly changing directions, rotates its direction to face the player. It will harm players if they collide with its very center.

When Clown Mask is hit by an explosion, it stops and fires eight bullets, one in each direction. The bullets will harm players on collision. Clown Mask then begins to cry and continue pursuing the player at a faster pace. After some time, it will slow down and resume its normal behavior.

Because Clown Mask's collision area is in the middle of its face, it cannot collide with players that are standing on the outer edges of the map.

Retrieved from "https://bomberman.fandom.com/wiki/Clown_Mask?oldid=36025"
Community content is available under CC-BY-SA unless otherwise noted.