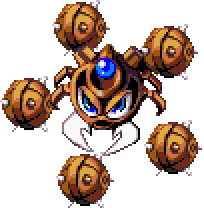 Centibeetle is the fourth boss of Super Bomberman 4. It is a large centipede mecha.

Centibeetle has two movement phases, which it switches between periodically. The color of the boss's eyes and forehead changes to signify which phase it is in.

Centibeetle's head has 8 HP, while each of its six body segments has 3 HP, making for a total HP of 26 HP for the boss as a whole. Once a body segment has sustained its maximum possible damage, it will turn red. The boss will be defeated when all of its segments are red.

Due to the speed of the boss and its thread shots, it is advisable to begin the battle with a large number of Speed Ups. Several Bomb Ups and Fire powerups are also helpful in order to more easily deal damage to multiple body segments at once.

Retrieved from "https://bomberman.fandom.com/wiki/Centibeetle?oldid=33007"
Community content is available under CC-BY-SA unless otherwise noted.