The Melody of the Gigantic Planet

Bomberman Jetters
Cat Rinrin Bomber is a super combined Bomberman debuting in the Bomberman Jetters anime in episode 29. It is a combination of Josephine the Cat and the unique Cat Bell attached to Josephine. It has the ability to trap its opponents inside yarn balls.

Cat Rinrin is the combination between a cat and a bell. Its head, eyes, and limbs are given a cat-like appearance. Its body is made into the bell. It has a ribbon attached to its neck. It has a bell at the tips of its tail and antenna. 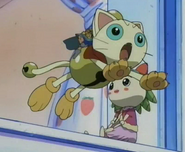 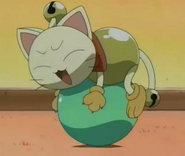 Cat Rinrin plays with the ball 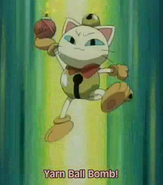 Yarn Ball Bomb
Add a photo to this gallery
Retrieved from "https://bomberman.fandom.com/wiki/Cat_Rinrin_Bomber?oldid=33628"
Community content is available under CC-BY-SA unless otherwise noted.